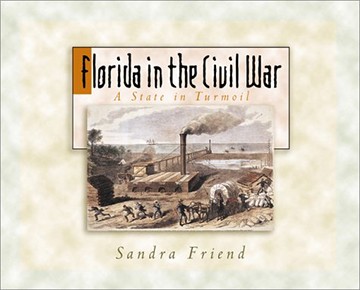 A State in Turmoil

Colorful characters, desperate times. The Civil War unfolded in Florida much differently than in the sister states of the Confederacy, with skirmishes fought in salt marshes, the cavalry saddled up to drive cattle northward to feed hungry soldiers, and Federal gunboats tempting escaped slaves to freedom.

Florida’s pivotal role in the War Between the States started with shots fired in Pensacola (the same evening as Fort Sumter was attacked in South Carolina) and continued to play out along the state’s coastline and rivers. Providing thousands of volunteer troops to battlefields far from home, providing luxury goods smuggled into coastal ports by blockade runners, and providing crucial commissary supplies such as salt and beef to starving Confederate troops, Florida supported the last gasp of the Confederacy through the end of the war. From battles over divided loyalties to the insistence of Governor John Milton never to surrender, Florida’s Civil War history unfolds through the accounts of its participants.

Booklist, October 15, 2001: “This well-researched volume provides an unusual perspective on the Civil War, following the conflict’s progress in Florida from the state’s secession in 1861 until the Union army took Tallahassee in May 1865…Illustrated with black-and-white reproductions of photographs, engravings, maps, and other documents, this book belongs in larger collections outside the region, as well as in Florida libraries.”

Voya, December 2001: “…It is very difficult to make nonfiction interesting to the average teen, especially to those who loathe history, but Friend puts together the right mix of word and picture to keep most reluctant readers turning the pages…it would be an excellent purchase for those libraries with large Civil War or American history collections.”