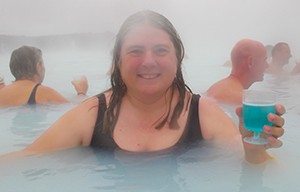 I started my travel writing career in 1995 writing features for newspapers nationwide, and had a regular travel column in the Pittsburgh Senior News for several years. My work appeared in magazines like Pennsylvania, Rock & Gem, Blue Ridge Country, and Backpacker in my early days.

In all, I’ve had more than 1,000 articles published and paid for over the course of my career, but I cut way back on pitching to print publications when I started writing guidebooks in 2001.

Between 2008 and 2011, I authored an Electronic Media column for each issue of the SATW Traveler, a bi-monthly newsletter available only to members of the Society of American Travel Writers.

In addition to those articles, I’ve had the following articles and photos published in recent years while juggling research for 2-3 books a year and projects for tourism promotion.

Trails & Travel – At the intersection of travel and the outdoors, follow the journeys that my husband John Keatley and I take. This is the Travel section of FloridaHikes.com, branded under its own URL in 2018.

Bindu Trips – Building on a base of app content brought over from the defunct Sutro Media apps, my contributions to Bindu Trips are itineraries for travel in Florida.

Natural North Florida – From December 2014 – May 2015 I was contracted to produce two blogs a month for VisitNaturalNorthFlorida.com. While the contract only required one image and a small amount of text per month, I took the opportunity to showcase rarely known features in the region with longer articles.

Buckettripper In 2011, I joined fellow SATW member Karen Berger in forming Buckettripper, an online magazine for experiential travel. We had top-notch contributors and have won numerous awards from SATW and NATJA since founding the site. The magazine closed in late 2017. The articles I contributed to it have been moved to Trails & Travel.