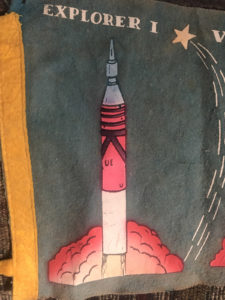 I live in area code 321. Apocryphally, it was assigned to this slice of America because of what goes on in my backyard. This week, 64 years ago, had I been sitting at this desk, staring out my window, I would have seen history happen. The first successful satellite launch from American soil. A marvel of engineering.

This desk, this house–none of it was here, then. A jungle, my father-in-law described it as, coming to Florida via San Diego, Chicago, and Ohio by way of Air Force postings in Arizona and Mississippi. Sand roads. Palm trees. Abundant oysters. Bountiful fish. Waterways that flushed the Indian River to the sea across Cocoa Beach, where buildings were appearing along the dunes. He traversed A1A daily on his drive to and from Cape Canaveral, to the blockhouse where they tested Atlas missiles. Perched on their own concrete dome, he and his colleagues watched the failed launch of Vanguard, the successful launch of Explorer. When the sky rumbled with that satellite tearing towards space, my husband was with his mother. An infant, still, unaware of the difference between thunder and a thunderous launch.

I wasn’t even born yet. But as I watch my neighbors water their plants, mow the lawn, walk their dogs, not even canting their heads to the heavens when yet another satellite goes aloft, it reminds me that history is in the eye of the beholder.

That one made me smile. Working, as I am, on crafting my first novel, historical fiction, a deep dive into events that happened before I was born, that comment made me think: had my characters been real people, they’d been alive when I was born. At least in my storyline. Not all that old, either. Younger than I am now. But oh, the things they’d lived through. For the eldest of them, growing up in the shadow of World War I. The Roaring Twenties. The Depression. For most of them, the New Deal. Service in World War II. The Atomic Age. The Cold War.

And with the launch of that satellite, 64 years ago–or more properly, Sputnik before it, nearly five months prior–the Space Age. The setting for my novel, the dawning of it, what shaped it, what these people’s lives were like because of the work they were doing, and the things they’d lived through to get to that point. The baggage.

History sneaks past us in the day to day. It’s the look back, the long view, its context, that shapes its meaning for us.

It’s writers who interpret it.

Last night I finished reading a novel written by a Swede, translated from the Swedish: The 100 Year Old Man Who Climbed Out the Window and Disappeared. 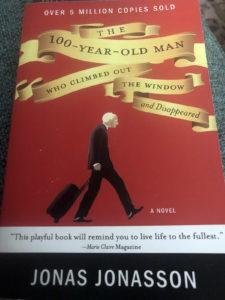 It’s a romp, plain and simple. One school of thought in fiction writing throws dire warnings out that authors ought stick to a point of view or two or maybe three in their storytelling, lest the reader collapse in confusion and give up. “Head-hopping,” or shifting point of view in the midst of a scene, is considered a cardinal sin.

Yet this novel works because of it, rather than in spite of it. How else to cover a madcap rendering of a hundred years of history, and one man’s role threaded throughout? Facists to fops, presidents to premiers, ambassadors to generals, Lundborg to Churchill, Oppenheimer to Kim Jong Il–their reactions to Allan Karlsson’s presence are hilarious. Precious. And all part of moving the story along.

If you know the rapid-fire presentation of world history in Billy Joel’s classic “We Didn’t Start the Fire,” imagine the same unfolding from the mind of a hundred year old Swede whose chumming with world leaders puts Forrest Gump to shame. Born in 1905, Karlsson is determined not to let his hundredth birthday unfold in an old folks’ home. He escapes out the window in his slippers, heads for the bus station, and his rollicking adventure begins.

Bouncing between his present-day daring escape and the zaniness that unfolds—Schrodinger’s elephant, anyone?—and his insanely colorful past, painted across a canvas of a century’s worth of world events, this story plays fast and loose with history, mingling truth and fiction up close and personal. Did Harry Truman try to drink a Swede under the table at a Mexican cantina at Los Alamos in 1945? Hell no, but who cares? It’s hilarious.

And that’s the point. Everyone’s perspective on their past is different. Sometimes misremembered, sometimes intentionally fabricated, sometimes deliberately purged. What you think was important in the past may not be what I care about. That’s fine. Rewriting world events? Many tut-tut that approach unless a book is clearly labeled as “alternative history” or “speculative fiction.”

Jonas Jonasson, the author, pulls it off at the micro-level. Personal interaction. A level that had me pulling out my phone every few minutes to look up yet another name to see if the person was a real historic figure or a made-up character. Looking up those names, I learned a lot of history I didn’t know, from Lundborg’s shameful eugenics research in Sweden to the politics of Indonesia in the 1950s. We, personally, have no idea who might have made a suggestion to Charles de Gaulle that changed the course of French history, or accidentally slipped the details of an atomic bomb trigger to a physicist while sharing a bottle of vodka.

That’s the fun of crafting historic fiction. The author’s playground, working in the shadows between known facts and unknown cause-and-effect. At the level of individuals–real and imagined–caught up in world events, their actions, their conversations, their own personal struggles coloring how those events transpire. And synchronicity.

You may have known people who changed history. Your postman. Your high school English teacher. Your veterinarian. The elderly man bagging your groceries. It’s funny how little we learn of the humble heroics of the people we say howdy to all the time, since real heroes rarely toot their own horns. My husband toots one here for a space worker he knew, Cal Fowler, who worked on those early launches.

Sadly, the gentleman we met that prompted that article, Tony Warren, passed away last January. Nowhere in his obituary does it share the quiet aside Tony blew right by during his breakfast with us, about the time his parachute didn’t open. We stopped our conversation on local history and asked for details. A Marine, a paratrooper, shattered by the impact but grateful to be alive. A long, hard battle to walk again. He went on to earn a doctorate at the University of Georgia. A lifetime of leadership, mentorship, and intellectual curiosity followed.

And that morning, he hiked a rocky trail with us. That he’d built, that he’d researched the interpretive information for, on the ruins of a Huguenot settlement that became a school for orphans. Thanks to the bequest of a mindful doctor, John de la Howe. The school that both Tony Warren and Cal Fowler attended. Together. 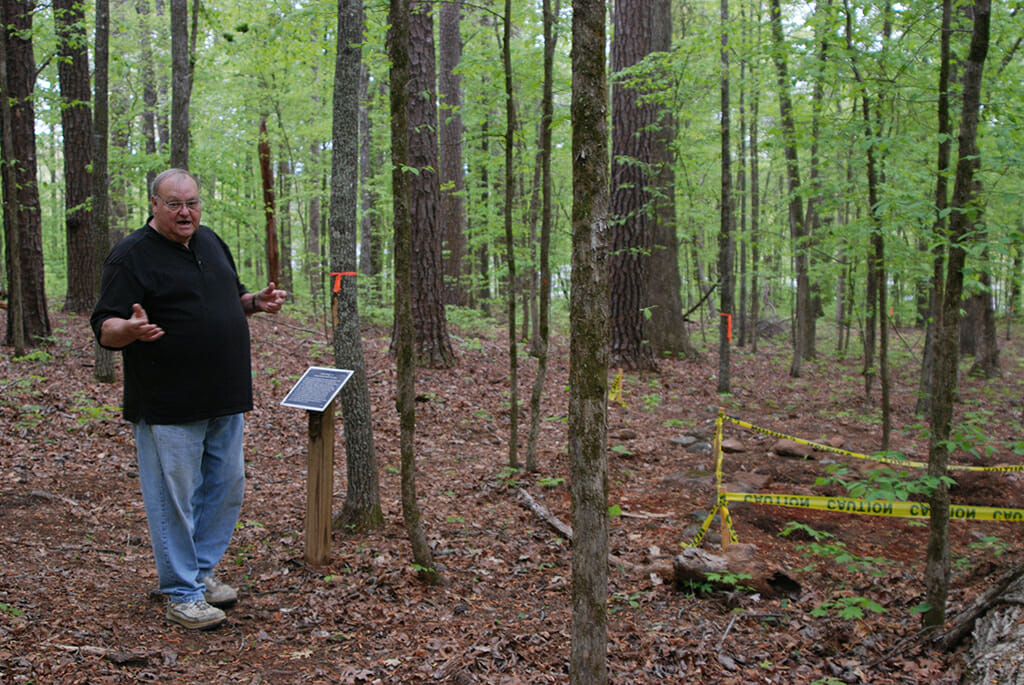 Heroic, not only that he could walk, but could hike. Threw himself into the subject, into his alma mater, with such passion. Sometimes we learn stories like his by accident, simply by listening, stopping the conversation, and asking more questions. Or sometimes we attend a funeral, or read an obituary, and say “imagine that!”

I’m a year, now, into that imagining for my trio of main characters in my novel. While downplayed by them all, the quiet heroics of their past shaped who they are and what they do, my story following their personal trajectories through the International Geophysical Year.

I can imagine them 64 years ago–since I’ve written that imagining–celebrating the launch of the Explorer satellite with their colleagues, Dixie cups of champagne all around. Not knowing how their being at that place, that time, those jobs, would impact a countdown almost a year later and ensure its success.

Nor would they ever.

But my readers will.

Never forget the unsung heroes, the hidden history, in our midst.