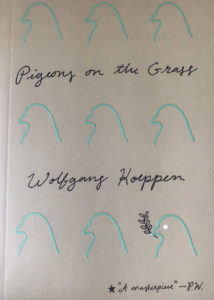 More than a year ago, I picked up Ulysses for the third time in my life and attempted to enter the Irish slipstream that James Joyce’s work pulls the reader into.

I made it two chapters in. Barely.

Stream of consciousness writing takes a willingness on the reader’s part – a conscious effort – to go with the flow in a literal sense, like a fallen leaf dropping to the surface of a babbling brook that empties into a tumbling stream and gushes over a precipice into emptiness before shattering on the rocks at the base of the waterfall, swirling off in a confusion of broken pieces into a broad river that fights a mighty tidal bore in its push through marshlands into the ocean.

It’s messy. It’s a tumble and a jerk and a pivot and a pirouette all at once, and your attention may shatter into pieces before you reach the end.

So it was for me. Ulysses didn’t grab me, Joyce’s brilliance notwithstanding. But Pigeons on the Grass did.

Serendipity in the shape of a pigeon led me there. For sake of research for my own novel, I scoured Bookshop for books featuring pigeons. Ironically, Wolfgang Koeppen’s 1951 novel has little to do with pigeons. Much like Thomas Pynchon’s Crying of Lot 49 (read on for more about that book) the title reflects but a momentary pause in the flow of the story. 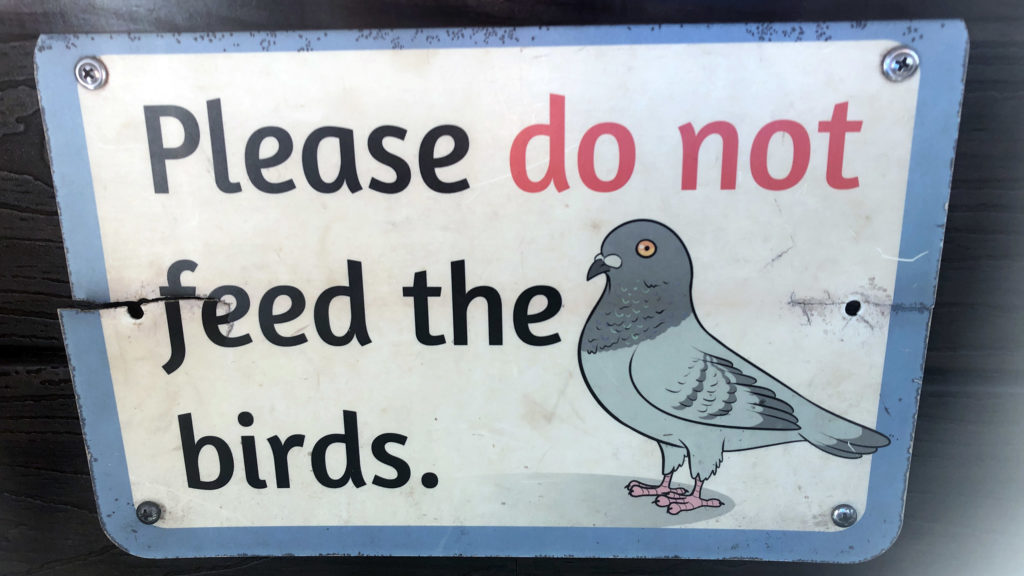 Pause for a blue bar. Respect the Sign of the Pigeon.

Set in Koeppen’s post-war Munich in 1948, published in Germany, like Joyce’s Ulysses it would have shocked the sensibilities of Americans of that era, so close to the heels of World War II. It will shock the sensibilities of some readers today. And yet it rings true with truths borne out by history about the interactions between victors and vanquished, related through the eyes of German citizens living their post-war lives, the occupying American forces, and curious visitors from outside both of their realms.

First translated to English in 1988 for a British audience, it had new life breathed into it with an updated translation and U.S. publication in 2020.

A flowing polynarrative with an ever expanding cast of characters, this novel has no chapter breaks. It moves fluidly from one character’s mind to the next. It explores broad themes of love, death, and hate in a pressure cooker of duress where citizens of Munich go about rebuilding their lives. Some deny the immediate past, others are unable to detach from its deep scars. The occupying force of Americans is largely Black, living a life in the Army in Germany that is a huge step up from the family back in Louisiana. Or New York. Yet Germany is not an idyll for them. France dangles a promise of true class equality.

Coping with prejudice underlies the entire narrative, but it is a slippery beast. American children fantasize of shooting down German children from their bombers; high-class Germans act offended by the Black Army men in their midst; some American tourists ooh at the rubble that the Allies created, others steadfastly refuse to join their spouses in “disaster tourism”; the working class struggles with how to put bread on the table; former aristocrats bemoan their change of status in this new world. Sexual liaisons are dynamic, opportunistic, and polyamorous, encompassing all classes, races, and orientations. Actors, artists, scientists, authors, military men, strong women, and an abortion doctor are among the cast. Throughout it all, a mysterious Black visitor from Mississippi named Odysseus Cotton weaves through the city, while his White Germanic porter — a man wracked with guilt over murdering men in the Ardennes who looked so much like the tourists he has always relied on for a living — bears a stream of jazz music that plays from a portable record player as if the Holy Grail.

Like a dryer, the narrative tumbles and interweaves from character to character in the continual flow of story. Yet the swaps are smooth. Even when you find yourself in the head of a dog, it is not an uncomfortable feeling.

It is an important book. It holds up and questions the realities of racism, sexism, ageism, us-against-them-ism through its characters’ interactions. It bemoans how not all war criminals were treated equal, how men and women who did horrific things are still in positions of power. It is at once a celebration of rebirth and a reminder that everything stays the same, no matter how hard we try to change the world. Except for the firmly-Munich setting – which takes on a character-like quality at certain turns – the stories within could have been set in the here and now, the issues still fresh, from questions of nuclear armament and saber-rattling in Korea and the Middle East to how refugees are sorted by their worth. 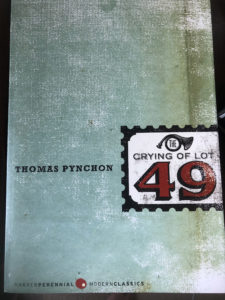 Also written stream-of-consciousness and published in 1965, Crying of Lot 49 stands firmly in the past. It’s a past I’ve immersed myself in for my own writing, the 50s edging into the 60s, the strands of change between the generation who participated in World War II and Korea and the bohemian youngsters who become hipsters. Having never read Pynchon and learning that I should, I found this book.

While the narrative flows from the main character — Mrs. Oedipa Maas — into the people she interacts with, the switches are seamless, the descriptions deep. Wordplay abounds. Some requires a knowledge of the times from which this book was born, others stick you with a groan, like Wendell, Mrs. Maas’ husband, a used-car salesman turned radio disc jockey who goes by the name of Mucho Maas. Ditties (sung to the tune of—) complete with lyrics pop up through the story. One that had me howling was a Glee club song for an upstart aerospace firm that invoked their competition and all the ways they were being screwed out of contracts. The underlying story involves the death of Oedipa’s former lover, her discovery that she must execute the will, and her falling-down-the-rabbit-hole into her past while dealing with both over-the-top California developer billionaire excess and gritty real life for folks just trying to get by.

The cover features a posthorn. As I once edited a magazine called The Posthorn, that signaled to me where the plot was headed. I won’t spoil the fun, dear reader. If you don’t already have an understanding of the intrigues of ancient European city-states, by the end of the book, you will.

Perhaps I will take up Ulysses again. For now, I’ll seek out more Koeppen and Pynchon when I feel a need to dip a toe in a stream of consciousness. In fact, I’ve ordered a stack of Pynchon to dig into. Gravity’s Rainbow glimmers next on my list.